The wind blew gently through the park. Recently fallen autumn leaves, crisp, crumpled and yellowing on the floor found themselves scattered far from their original tree as they began their journeys of flight around Roath.

Also scattered around Roath Park on that bright Sunday were people busying themselves with their daily activities. Kids were playing football in one corner, a guy practised his golf swing in another. Dog walkers and runners proceeded on their endless laps of the parkland. There was no sense of the urgency that normally haunts a day in the city.

Then from one street a flag is seen to approach. It blows gently in the wind. Inviting looks of curiosity and wonder as it crosses the park. The flag stops. It is red in colour. The pole it is attached to carried determinedly by a person. This person see’s the light change as the flag swims in the sun. They can see the ever growing shadow, stretching out from their flag across the green grass of the park. 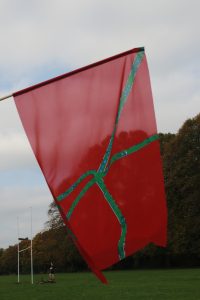 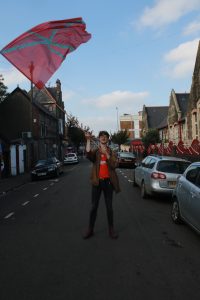 The flag stand alone. But not for long. Soon more flags approach the park. Coming from different directions they all head towards the original red flag. The flags of Roath have been summoned. Now they gather to flutter and fly in the air of Roath. Their time has come. 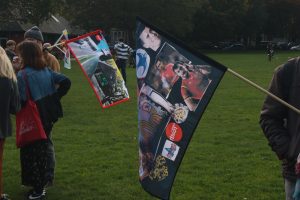 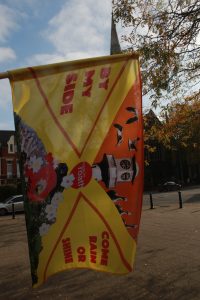 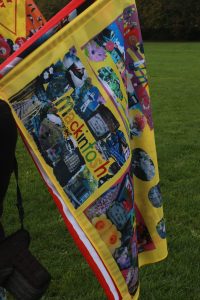 What am I talking about? Well, it’s very simple. I am merely describing the situation on Sunday the 15th of October as the flags from the Made in Roath project “By my side, come rain or shine” gathered for a walk through the streets.

The flags are part of a project MiR has been running with artists Pip Tudor and James Cocks. Together they have been working with different community groups over the last few months to create these brightly coloured wonders. They also made a collection of postcards which can currently be seen on the railings of the Macintosh sport centre.

Back in the park and soon people began to gather, representatives from each community group proudly claiming their banner. The groups coming together were from the wide ranging communities of Roath and wider. They were the Trinity Centre, TAVS, Journeys, Vision Twenty One, Tradgerville Primary, Roath Park Primary, Albany Primary, Cardiff High, St Teilo’s C/W High school and The Trebanog Project. 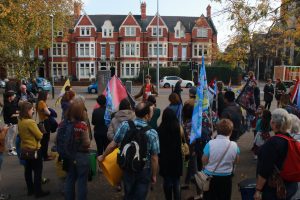 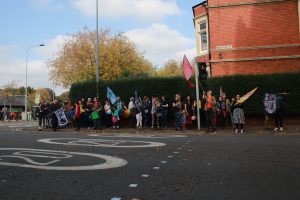 When all were assembled drums and shakers started to sing an unknown tune and we began to march. Drawing looks and questions from passers by at this unusual sight. The flags reaching high above the walking procession, a procession of a community coming together under the flag of creativity. The untamed tune playing out drowning the noise of passing traffic.

The walk took us through the streets of Roath on a winding path. We halted at cultural stopping off points along the way. At one point we stopped at the wall of Juno Lounge to see Paddy Faulkner “Passchendaele” on the outside wall. The work marks the anniversary of the battle with the text of little known war poet Alfred Noyes and combines a digital image. Paddy spoke with great passion and elegance about the meaning of the work and inspiration behind it. I myself found my thoughts dwelling on that terrible conflict and the advancement of 100 years of time. 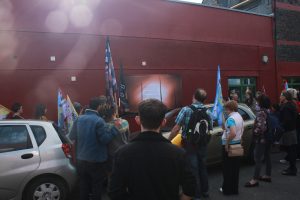 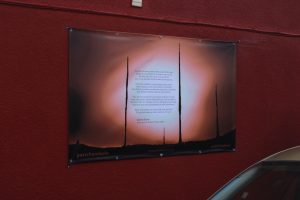 Later we moved off down the street to enjoy more spoken word, music and other delights. We also halted at the Mackintosh Community Garden for a brief tea stop before moving on to Inkspot. 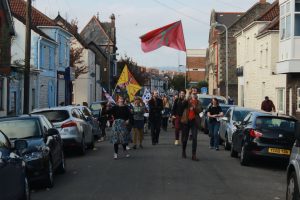 As we entered the grand old church we discovered a long table set before us, food was served and we sat and ate, chatting about the day and ourselves. As we spoke the flags from the walk proudly fluttered above us. 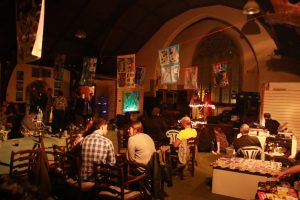