Behind door 4 of the Made in Roath advent we have a short blog post on the amazing world of community chess.

This year’s Made in Roath festival saw the popular return of Community Chess outside the Penylan Library. Run by the amazing Jack Nicol, community chess is basically what the words suggests. Games of chess in the community, free and open to anyone regardless of age, ability or skill all are welcome to try. It can be played with friends, family or complete strangers. I’m not sure if anyone walking past Penylan library were challenged, in an over dramatically duel style fashion, to a game of community chess but I like to think so.

Chess is a fantastically exciting game and it was brilliant to see it being played on the streets of Roath. It’s a game which has an air of intelligence about it but in truth Chess is such a simple game anyone can and should play it. Chess is a game that appears throughout history in the halls of the kings to the gutters of slums. It’s one that enlightens the intellect and changes the soul.

This year saw a series of games being played on the last Sunday of the festival. At first people stopped, confused by the sight of a series of small tables and chairs set up with chess boards on but once the concept had sunk in the games began. Some lasting minuets others lasting hours. The traditional silence of the library was matched with the silence of the chess games.

Its always a delight to see street chess games, its something that is common in other cultures but not so much here. Its always great to see in Roath and its always a sight that makes me want to play more chess. 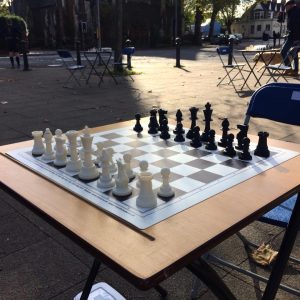