Lately I’ve been reading a lot of leadership books (for reasons which really don’t need going into right now) and in doing so I’ve come to realise that Made in Roath shouldn’t actually work.

According to most business models Made in Roath shouldn’t happen, yet it does. It’s happening in 13 days, for the 9th time since it first happened in 2009. So why is this? Why is it that Made in Roath, like nearly every other art and cultural organisation in the country, is still going when according to the traditional business models it shouldn’t? The obvious answer is Made in Roath and all these other arts organisations are not businesses and are therefore not operating under the same requirements and outcomes.

But there is something more than that at work here. There is a reason why people spend all day in work and then come along to give four or five hours of tireless volunteering at an evening event. Why coordinators spend hour upon hour of their free time dealing with stressful and vexing situations determined to make an event happen. It is the same reason why people stay up until the wee small hours of the morning writing, painting or creating something that only a handful of people will see, even though they have to be in work in a few hours.

This reason is very simple to explain. It is also the same reason why you have heard of the Wright Brothers but have never heard of Samuel Pierpont Langley.

The turn of the century race for powered flight was the .com boom of its day. It seemed that everyone was chasing the dream of flight, as well as the fame and wealth that went along with it. The smart money was on Samuel Pierpont Langley. He was the US government sponsored inventor. A professor of engineering and a well respected scientist. He was also given a very generous payment from the US government to develop his ideas. He used this to design, experiment and hire all the best people to help him. The New York times even sent a reporter to follow Langley around so confident were they that he would be the first.

Yet it was the Wright brothers, neither of whom had a college degree, who self funded their experiments and were based in a windswept, out of the way sandy island called Kittyhawk that didn’t even have a pub let alone any scientific/educational establishments that were the first to fly. On the 17th of December 1903 they flew for 59 seconds, covering a distance of 852 feet.

So what gave the Wright brothers their advantage? Put simply it was belief.

Samuel Pierpont Langley was in it for the fame, for the wealth. That as soon as Langley learnt he had been beaten he gave up on his efforts is proof of this. He didn’t use his funds, resources and knowledge to work with the Wright brothers, he just quit. The Wright brothers on the other hand were in it for the betterment of the world. They believed that what they were doing was important. They believed. And thats what drove them to do it. 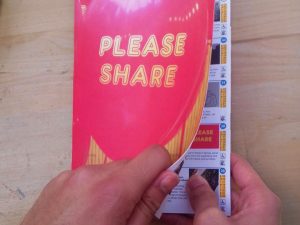 It’s this belief that powers us to try, to make, to fly. No one is an artist or a maker for the money. You do it because you believe it in. Made in Roath and all these other cultural bodies work because of belief. Because we believe in what we are doing. Culture happens because people believe in creating it, they believe its important to show it, to spend their nights going to see it. They believe its important to think, to read, to consider. Culture happens because of belief. We give time, and often our sleep or social lives, to Made in Roath because we believe it’s important that it happens.

This is why we are thrilled to see it happen again, for the ninth time, from October the 15th to the 22nd. There is also a special preview event at the Gate on the 14th with the fantastic Wonderbrass. You can pick up a brochure of whats going on in multiple places around Roath or simply check out the online version.