According to the internet the pub quiz all began in the 1970s by a company called Burns and Porter. They created a weekly quiz night in their pub loosely inspired by the popular Trivial Pursuits general knowledge game. It was a cunning and frankly brilliant plan to get people into the pub on quiet nights.

Since its humble beginnings the pub quiz has grown to be one of the most popular pub past times (the most popular one being “drinking” surprisingly. Not sure where karaoke falls upon this popularity scale but probably not as high [unless its soprano karaoke night of course hehe]).

Last night Made in Roath with the kind help of the Gate art centre in Roath joined in on this fine 1970s tradition (possibly the best tradition from the 1970s). The night was a great success with the Gate Pulpit bar being packed to extra seating added level. We held the quiz to raise money to help Made in Roath pay a very unfair and uncool bill that has been forced upon us.

The night saw 10 teams taking part in the ultimate Roath test of wit and general knowledge. Each team took part in the traditional six rounds (first being the very difficult picture round) with the other five rounds being themed around “Art knowledge”, “Music”, “Local/Roath knowledge”, “Current Affairs” and a fifth round that I currently can’t recall because I was outside at the time but it was something to do with questions about things, possibly.

Anyway there was a gripping finale with two teams tied in the lead. To settle matters we went to the tie break question, “how long is the River Severn?” (The answer is 220 miles.)

Stu, a regular quiz goer, with team mates Sam and Beech won the tie with the closest guess of 200 miles and claimed victory for the night.

But the real winner of the night was the fun we all had along the way. Questions were asked, some were answered and a few were guessed but I can’t help feeling we all became a little richer from the nights experiences.

Thanks for reading, see you at the next quiz. 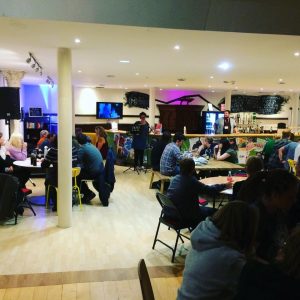