One quite ninja thing I saw this year during the Made in Roath festival was “Slant of Light” by Andrew Pershin and curated by Zosia Krasnowolska. It was displayed in the front room of an open house on Kelvin road.

Slant of light was a large window hang print of a frozen waterfall somewhere in arctic Russia. The image is of an analogue photograph by artist Andrew Pershin, arranged by Zosia Krasnowoiska. The fabric-printed image aimed to create an illusion of winter that we rarely get to see.

The print covered the window and as the daylight sun shone through the window highlighting and creating cold steams of light into the room. The image of the waterfall frozen in time in the actual instance of ice and secondly in the frozen capture of the camera as the photographer took the image freezing this moment forever more.

The frozen waterfall reflected through back to another world, to the world of Scott of the Antarctic or of adventures traveling across arctic tundra. The image produced a thrilling illustration of adventure and travel in my mind. 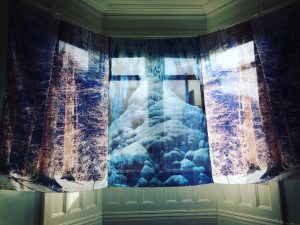