This will be the 4th time we have strolled to and fro over the earth from Merthyr to Roath on the journey to Made in Spring.

It all started in 2014 under the name the “Red Shoes”. We then returned in 2015 and 16 under the banner of the Red Route. The red theme stems from the fact that Merthyr was the first place in world that saw a red banner being raised as a sign of protest during the 1831 Merthyr Rising. That event saw some 7,000 to 10,000 people marching under that red flag which later was adopted as the internationally symbol of struggle, injustice and socialism.

It has been my privilege to have walked all three previous Red Routes and this shall be my fourth. It’s a 27 mile ritual, over two days that begins in the Red House in Merthyr and ends on Plasnewydd Road for Made in Spring and the start of the Spring arts season the next day. It works out at about 17 miles the first day and around 10 the next.

The thing that frequently surprises me about the Red Route is the look of daunting disbelief that comes across peoples faces when they hear the mileage and the route. But the truth is it really isn’t that bad.

I mean it’s not like we are doing S.A.S. selection or anything, it’s just a pleasant stroll through some beautiful Valley countryside, past some incredibly interesting remains of the industrial revolution with frequent cultural stopping off points along the way for performances, art work and readings to watch and ponder over as you walk at your own pace along the Taff Trail. Plus you’re surrounded by some lovely people, get to enjoy a somewhat excess amount of tea and cake stops and thats not mentioning the Made in Roath guide team who know the Taff Trail so well they can (and in my case have often) walked the trail in the pitch dark, at 2 a.m., somewhat tipsy from the pub without falling over a single tree. (Horses are another matter mind.)
The most challenging thing about the Red Route is the same with any distance walk. It’s getting the mindset right. The walk isn’t hard at all, it’s on a good path and to be honest the whole trail is parallel to a train line so you’re never more than a few miles from a train station.
Its all about the mindset, if you approach the walk with doubt or uncertainly then you’ll probably have a bad time but if you approach it with a sense of adventure, a positive attitude and a cheerful idea of fortitude then you’ll love it.
Even if the weather turns wet. Some of the best walks I’ve done have been where it’s been hammering down with rain but because of the people around me and the mindset that “yeah this is pretty rubbish but hey I’m in it so may as well enjoy it and at least it’ll be an amusing story to tell”.
In some strange way it’s an encounter into the Sublime. (That strange artistic/philosophic idea by Edward Burke of experiencing awe in the strongest physical elements of nature.) Approach the Red Route with a positive mindset and you’ll have a great time. Oh and of course wear comfortable footwear, either boots or trainers and maybe bring a bottle of water.

Do join us for Red Route 2017. These days we rarely get the chance to walk. Time is often against us in our busy world, finding the time to walk and just think is sadly a rarity. One of the beauties of the Red Route is that it allows you this time to slow travel and ponder. To walk and not run. To journey rather than travel. Even if you can only join us for one of the two days you’ll still enjoy it. Thanks for reading, hope you’re having a good day.

P.S. One great tip is to wear two pairs of socks, a thin pair and a thick pair. This stops your foot rubbing your shoe and cuts down on blisters. 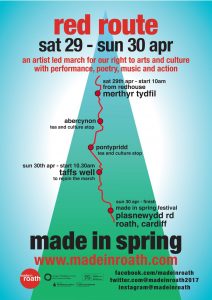